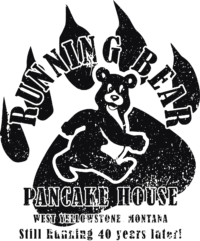 There was a couple that were school teachers from California by the name of Thompson who needed something to do during their summer vacations. They had visited West Yellowstone and Yellowstone National Park many times and fell in love with the area.  Around 1964 they bought the property where the Running Bear sits today and proceeded to build a Pancake House with living quarters in the back of the building.  The Thompson’s opened in 1965 or 1966 it was a brick building 52 feet by 30 feet wide. Dixie’s father Herman Hermanson was part of the crew that built the Running Bear. Every day the crew would eat their lunch in a small building that sits behind the restaurant at the end of the day they would store there tools in the same building.  One morning they came to work and opened the storage building door and there was a black bear that had locked it’s self in the night before.  When they opened the door the bear took off on a run hence the Thompsons named the restaurant Running Bear.  The Thompsons operated the restaurant during the summers up until 1974 they then sold the business and property to a Family by the name of Todd from Oklahoma. The Todd’s owned the business for 2 years and then sold to Leo and Ann Roberson who lived in West Yellowstone. Leo was the Deputy Sheriff for Gallatin County serving the West Yellowstone area.  Leo and Ann operated the Running Bear until February 1980 when they sold to Mike and Dixie Klostrich.  They did the first remodel in 1988 and then added on the back room in 2007. Mike and Dixie have retired and spend summers in West Yellowstone and winters in AZ. Their daughter and son in law Kelly & Matthew Burden took over the Running Bear in 2012 and plan to keep it in the family for many more years.